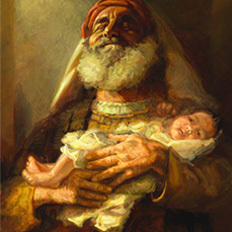 “Now there was a man in Jerusalem, whose name was Simeon, and this man was righteous and devout, waiting for the consolation of Israel, and the Holy Spirit was upon him. And it had been revealed to him by the Holy Spirit that he would not see death before he had seen the Lord’s Christ. And he came in the Spirit into the temple, and when the parents brought in the child Jesus, to do for him according to the custom of the Law, he took him up in his arms and blessed God and said, ‘Lord now you are letting your servant depart in peace…’”

Men and women who have grown old in friendship with the Lord sometimes say that they are ready to “go home.” We might be reminded of St. Paul who “would rather be away from the body and at home with the Lord” (2 Cor. 5:8). Such eagerness for death would be perverse were it not for “the Lord’s Christ,” who is “the consolation of Israel.” Why is it, Origen wonders, that Simeon “held [Jesus] in his arms, and kept rejoicing and exulting”? Because Simeon knew that “the little child he was carrying had come to release captives and to free Simeon from the bonds of the body,” and Jesus alone could do this “with hope of life to come.”

Origen goes further. We are all, he suggests, Simeon. Death comes for us all. But, says Origen, if someone wishes “to go forth and reign” after this life, he too “should enfold [Jesus] in his arms, and fully grasp him in his bosom. Then he will be able to go in joy where he longs to go.” But how can we hold Jesus like Simeon? The same way as Simeon did: by following the Spirit into the temple. The temple, Origen explains, is the Church. But just coming physically to church is not enough. We must walk by the Spirit so that our way of life becomes “worthy of the title ‘church.’” Origen concludes the homily with the first known prayer to the infant Christ: “let us pray to Jesus himself, the little child. We long to speak to him and hold him in our arms, to whom is glory and power for ages of ages. Amen.”