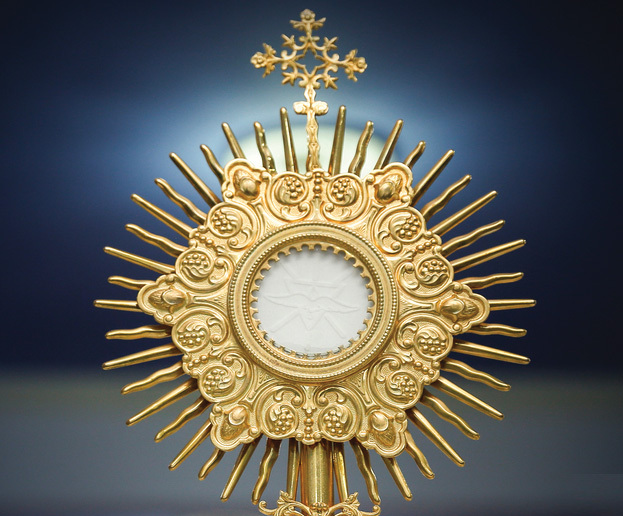 The Marvel of the Eucharist

We need to understand the marvel of the Eucharist—what it is, why it was given, and what is the profit of its celebration: we become one Body, and members of His flesh and of His bones. Let those initiated into the Sacraments follow what I say.

In order then that we may become one Body not only in love but in lived reality, let us be blended into that flesh. This blending is accomplished by the Food which He has freely given us, desiring to show the love He has for us. On this account He has mixed up Himself with us. He has kneaded up His body with ours, that we might be a One thing, like a body joined to a head—for this belongs to those who love strongly. That is why Christ has done this: to lead us to a closer friendship, and to show His love for us. He has granted to those who desire Him not only to see Him, but even to touch, and eat Him, and fix their teeth in His flesh, and to embrace Him, and satisfy all their love.

Let us then return from that Table like lions breathing fire, having become terrible to the devil, thinking about our Head, and about the love which He has shown for us. Parents often entrust their offspring to others to feed. “But I,” He says, “do not do that. I feed you with My own flesh, desiring that you all be nobly born, and holding forth to you good hopes for the future. For He who gives Himself out to you now, will do so much more in the future. I have willed to become your Brother. For your sake I shared in flesh and blood, and in turn I give out to you the flesh and the blood by which I became your kinsman.”

This Blood makes the image of our King flower brilliantly within us, produces unspeakable beauty, and keeps the nobility of our soul from wasting away, watering it continually, and nourishing it. The blood we derive from our normal food does not turn into blood at once, but something else. This Blood does not work that way, but right away waters our souls, and works in them a certain mighty power. This Blood, worthily received, drives away devils and keeps them far away from us, while it calls to us Angels and the Lord of Angels. For wherever they see the Lord’s blood, devils flee, and Angels run together.

This Blood, poured forth, washed clean all the world. This Blood is the salvation of our souls. By it the soul is washed, is made beautiful, and is set on fire. It causes our understanding to be brighter than fire and our soul more sparkling than gold. This Blood was poured forth and made heaven accessible.

Awe-inspiring indeed are the Mysteries of the Church. Awe-inspiring indeed is the Altar. A fountain went up out of Paradise, sending forth physical rivers. From this Table springs up a fountain which sends forth spiritual rivers. By the side of this fountain are planted not fruitless willows, but trees reaching even to heaven, bearing fruit always ripe and unfading. If anyone is scorched with heat, let him come to the side of this fountain and cool his burning. For it quenches drought, and comforts all things that are burnt up, not by the sun, but by the fiery darts of the devil. For it has its beginning from above, and its source is there, from which also its water flows. Many are the streams of that fountain which the Comforter sends forth, and the Son is the Mediator, not holding mattock to clear the way, but opening our minds. This fountain is a fountain of light, spouting forth rays of truth. By it stand the Powers on high looking upon the beauty of its streams, because they more clearly perceive the power of the Eucharistic offerings, and the flashings unapproachable.

For as when gold is being molten if one (if it were possible!) dipped his hand or tongue in it, he would immediately render them golden, so also—but in much greater degree—do the Eucharistic offerings work upon the soul. Fiercer than fire the river boils up, yet it does not burn but only baptizes whatever it lays hold of.

This Blood was ever prefigured of old in the altars and sacrifices of the righteous. This Blood is the price of the world. By this Blood Christ purchased the Church for Himself. By this Blood He has adorned her entirely. Christ has purchased us with His Blood and adorned us with His Blood. Those who share this Blood stand with Angels and Archangels and the Powers that are above, clothed in Christ’s own kingly robe, and having the armor of the Spirit. But I have not yet said the greatest thing: they are clothed with the King Himself.

From St. John Chrysostom, Homily on John 46.3–4, adapted from the NPNF translation by John Sehorn.