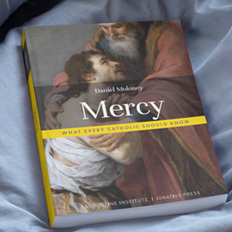 Faith & Culture by the Augustine Institute

Faith & Culture presents an interview with Fr. Daniel P. Moloney, Ph.D., chaplain at the Massachusetts Institute of Technology and author of Mercy:  What Every Catholic Should Know (Augustine Institute & Ignatius Press, 2020).

This book seems wonderfully timed given the Coronavirus crisis. What led you to write it?

I wrote the book because I’m convinced that most people don’t understand the concept of mercy. Since mercy is basically the virtue we turn to when things aren’t right, and this fallen world has a lot of imperfection, getting mercy wrong is a big deal. For one thing, it means that we also misunderstand justice, even though we talk about ‘justice’ nonstop in our politics (social justice, economic justice, environmental justice, gender justice, racial justice, etc.). Most people think that justice and mercy are opposites. But if justice is the opposite of mercy, then mercy is unjust! A lot of people believe that there’s something wrong with mercy, especially in those political movements that promote a vision for a more just version of society (a phenomenon which I call in the book “justice-only politics”). But a theory of justice that doesn’t have a coherent account of mercy soon becomes inhumane.

What’s more, the same mistake happens in the Church. People frequently oppose God’s justice to God’s mercy. Sometimes that involves the ancient heresy of Marcionism, which claims that the Old Testament God is justice-only, and the New Testament introduces the merciful Jesus. Of course, that gets the bible wrong: God is called merciful throughout the Old Testament, even when he’s punishing Israel or its enemies; meanwhile the concept of Hell as an eternal punishment for sinners is developed for the first time… in the Gospels by Jesus himself. One of the themes of the book is that we have to be merciful as God the Father is merciful (Luke 6:36), and so we need to start to see how the Father is both merciful and just.

In the book I also talk about a third common mistake, in which Catholic spirituality over the centuries has divided into a spirituality of strictness as opposed to a spirituality of laxity. The advocates of strictness tend to disparage mercy, while the advocates of laxity tend to disparage justice (and occasionally, they also disparage truth, as when people argue that “for pastoral reasons” or reasons of mercy, we should not teach certain controversial doctrines or form people in them). A healthy Catholic spirituality includes both—a great ambition to be holy along with a great spiritual support system to pick us up when we sin or fail.

I wrote the book because I want people to understand that mercy is actually ordered towards justice and holiness, rather than opposed to them.

You explain that we can rightly say ‘God is love’ but should not say ‘God is mercy’: why is that distinction important?

Mercy is a virtue that responds to something wrong, some privation that those in need of mercy can’t fix on their own. The poor are in need of alms, because they can’t give themselves the money they need; the homeless can’t give themselves a home, so they need someone else to help them; sinners can’t make themselves into saints without God’s help. As I say in the book, if you’re asking for mercy, it’s a sign that you’re having a bad day. And yet, before the Fall, everything was perfect, and so there was no need for mercy. God saw that the world He had created was good, and loved it.

There are a lot of things that we can say about God that are always true because they describe what God is essentially and eternally—those would be things like “God is Justice” “God is Goodness” and “God is Love”. On the other hand, there are some things we can say about God that are true because of God’s actions in creation, and these aren’t eternally true—before God created, one couldn’t say that He was “Creator,” for example, and so to be Creator isn’t part of God’s eternal essence. Mercy is in that second category. If it were the case that God were eternally merciful, then He’d have to be eternally responding to something wrong. But before the universe was created, there was only God—and there’s nothing wrong with God.

Truths about God in that second category, even though they don’t characterize God’s essence, do reveal to us something about God’s essence—after all, God does what he does because of who he is. And so mercy tells us some important things about God. For many people, the experience of God’s mercy confirms to them that God loves them and that God is good and that God is powerful enough to help them when they’re in need. So, yes God is merciful, but no, He’s not mercy itself the way He’s Love itself.

Why does Mercy: What Every Catholic Should Know begin with an examination of mercy as a virtue or prerogative of a ruler?

Mercy today is often thought to be a religious idea only. But originally the idea came from politics. Julius Ceasar was famous for his clemency towards his political opponents. Augustus Ceasar had the word “clementia” on his shield. The Roman senator and Stoic philosopher Seneca wrote a treatise On Mercy to counsel the young emperor Nero on how to be a great ruler like the emperors before him (it must be said, Nero wasn’t a great student). In this older view, good rulers had humane and merciful policies for when things went wrong, while tyrants punished mistakes and failures severely. The ruler who was known for his mercy earned the love of his people, while the tyrant could only rule by fear.

The religious concept of mercy borrows from this political concept—obviously, if God is the greatest king, He would also rule with mercy. But not with a mercy that is opposed to political reality or is something utopian. God’s rule over fallen human persons has many of the same challenges as for anyone who tries to rule over fallen human persons. He cannot govern by fear alone, and He cannot allow leniency to lead to general disorder. I argue that certain lessons we learn from our own social and political lives can help us to understand why even some of the harsher aspects of God’s government in the Old Testament are consistently described as an aspect of His mercy.

That’s why the book goes back and forth between mercy in politics and mercy in God’s plan for salvation.  There’s a sense in which mercy is part of the natural law, so that if our policies get mercy wrong, nature—human nature—will resist and we’ll see those policies fail. In the mid-20th century, there was a movement to replace criminal punishment with psychiatric therapy (as depicted in the book A Clockwork Orange). The reformers thought this was a more merciful way of dealing with criminals; however, they got mercy wrong. They assumed that the criminals never had bad wills, but just needed to deal with some problems from their youth—and the crime waves of the 1970s and 80s followed as a consequence. Mercy is supposed to lead to a more just society, a more politically stable and humane society that is well-ordered and that people support willingly. If some conception of mercy doesn’t do that, it’s probably not real mercy.

How does the devotion to Divine Mercy relate to the theology of God’s mercy?

Devotions are very important in the Catholic Church, in part because they often pack a lot of solid theology into a practice that anyone can adopt. The ancient slogan lex orandi, lex credendi captures this—how we pray reflects and reinforces what we believe. St. Faustina’s devotions to Divine Mercy, as promoted especially by St. John Paul II, have made many people interested in mercy when the culture at large barely talks about it. In my own pastoral practice, I’ll often assign as a penance the chaplet of Divine Mercy, which is especially effective spiritual medicine when someone confesses anger towards a particular person or group. By entering into God’s mercy towards sinners or towards our enemies, we start to look on them with God’s loving eyes, separating the sinner from the sin all the while growing in solidarity with the person—and we grow in mercy towards them as well.

Some people go overboard with St. Faustina’s revelations, elevating them to the level of Scripture. In the book I mention a former parishioner of mine who would claim that, since St. Faustina had visions of Jesus in her prayers, we should treat her Diary as the word of Jesus himself—more important than the catechism, more important than the pope. Pope Benedict XVI addressed this sort of argument in an interesting reflection on the Third Secret of Fatima. He says that part of the problem comes from calling such supernatural visions “private revelation,” which seems to put them on the same level as the deposit of faith, which was closed at the death of the last apostle. He suggests that the visions of the sort received by St. Faustina, or St. Margaret Mary Alacoque, or St. Bernadette, or the children of Fatima shouldn’t be called ‘revelation,’ but rather modern-day prophecy. That points their supernatural origin, but also makes clear that they aren’t the same as the Word of God becoming Incarnate. One characteristic of prophecy, even from the Old Testament, is that the prophets see more than they can understand. St. Matthew’s Gospel tells us that Isaiah’s prophecies applied to Jesus and Mary, but Isaiah himself didn’t completely comprehend what God was telling him about events hundreds of years in the future. Likewise, the children at Fatima didn’t fully understand what our Lady was telling them about Russia, because they didn’t know enough about world politics. The Church has investigated these prophetic prayer experiences and declared that they don’t contradict the deposit of faith, that the faithful can accept them with prudence, but that they aren’t something that one has to accept to be a good Catholic. The focus of the devotions should be God’s mercy itself—and for most people most of the time, they are.

I speculate in the book that God might have sent us the devotions of these modern-day prophets (St. Faustina, as well as St. Margaret Mary and the Fatima visionaries all introduced devotions focused on God’s mercy) in response to the angry, justice-only political climate that characterizes our day. Rather than wanting to destroy our enemies or the enemies of justice, these devotions teach us to pray for them and call God’s mercy down upon them. This teaches us to think about those who fall short of God’s standards in a Christian fashion, as those most in need of God’s mercy.